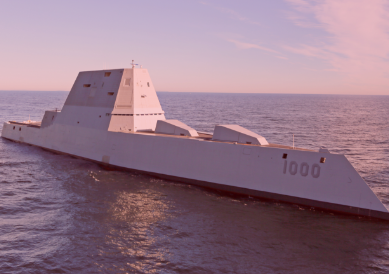 “This isn’t just a US Navy Zumwalt-class destroyer. It’s a business lesson.

Follow us as we show you how this ship is relevant to your business – no matter what your industry.

In 2005, the U.S. Navy had plans, and the budget to build 32 destroyers. At a total estimate of $9.6 billion, the price came out to $266 million each. A not unreasonable amount for such a vessel.

As the project began and time went on, the costs began to soar past the initial estimates. So the Navy did what any business would do, and decided to reduce the order quantity, in order to stay within the budget. First 8 ships were slashed, and the order was reduced to 24. Then dramatically the order was cut almost 75% to 7. However, that still wasn’t low enough, and in 2009 the order was finally reduced to 3 ships.

While the order size was shrinking, the costs still kept rising, the cost per ship rising to $4.24 billion.

That still isn’t the end of the story! In April 2016, the total program cost was $22.5 billion, with an average cost of $7.5 billion per ship. Ok, that was more money than they intended to spend – but at least they got radar-deflecting, powerful guided missile destroyer -right? The ships were built in order to fire long-range land attack projectiles (LRLAP). A fancy way of saying that the unseen boats offshore could fire on land.

Even this became a fiasco.

The Navy canceled procurement of the LRLAP because the cost of one shell skyrocketed up to $1 million dollars.

There’s not much budget for target practice when one shell costs that much.

And that’s our lesson

So often our company manufactures a truly great product, or the service our business provides is really fantastic. But when we are too involved in the end product, we can lose sight of our operational costs – which can ultimately drown a business.

Whether it’s unexpected increases in real estate, sudden tariffs on necessary parts, staff expanding at a rate faster than revenue generation, or plain forgetfulness to include certain items in the budget, poor planning slowly but surely will sneak up on your company.

You don’t have to be caught in a Zumwalt-class financial failure. Make sure to overestimate costs, trim items that don’t contribute to your success, and of course, you can always bring in KSW Solutions to help you with business development.